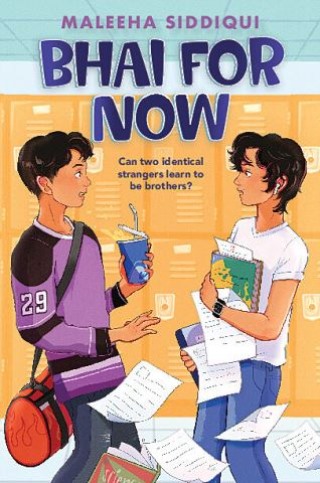 A fresh and fun new spin on the Parent-Trap story, by Indies Introduce author Maleeha Siddiqui

Ashar is busy with the ice hockey team, studying to get into the best school, and hanging out with his friends.

Shaheer and his father are always moving, following his dad's jobs. Shaheer has given up hope of finding a place where he can put down roots, a place that feels like home.

The two boys have nothing in common.

But when they meet on Shaheer's first day at his new school, it’s like looking in a mirror.

They quickly figure out that they're twins, separated as babies. And they are determined to do whatever it takes—including secretly switching identities—to get to know the parent they've been separated from.

Bhai for Now is by turns heartwarming and hilarious, and with a unforgettable Muslim family and friendship story at its core.

Maleeha Siddiqui:
Maleeha Siddiqui is a first-generation Pakistani-American Muslim living in Virginia. When she isn't writing, she can be found working at a biotech company or hanging out with her family. Barakah Beats is based on her own experiences growing up in America as a young practicing Muslim.