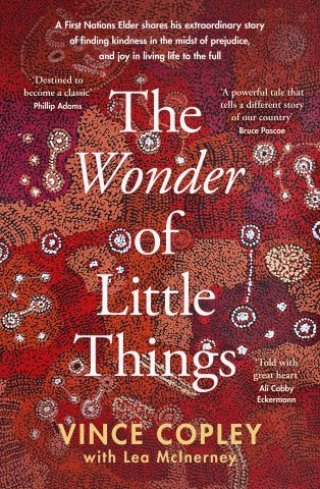 The Wonder of Little Things

A First Nations Elder shares his extraordinary story of finding kindness in the midst of prejudice, and joy in living life to the full

'Welcome to my story. It's a simple story of a simple person, who's lived a long life now with some struggles along the way. I didn't learn a lot in school, not in the classroom, anyway. But I learned a lot from life.'

Vince Copley was born on a government mission into poverty in 1936. By the time he was fifteen, five of his family had died. But at a home for Aboriginal boys, he befriended future leaders Charles Perkins, John Moriarty and Gordon Briscoe. They were friendships that would last a lifetime.

'Always remember you're as good as anybody else,' his mother, Kate, often told him. And he was, becoming a champion footballer and premiership-winning coach. But change was in the air, and Vince knew he had more to contribute. So he teamed up with Charlie Perkins, his 'brother' from the boys' home, to help make life better for his people. At every step, with his beloved wife, Brenda, Vince found light in the darkness, the friendly face in the crowd, the small moments and little things that make the world go round.

In The Wonder of Little Things, Vince tells his story with humour, humility and wisdom. Written with his friend Lea McInerney over many cups of tea, it is an Australian classic in the making, a plain-speaking account of hardship, courage and optimism told without self-pity or big-noting.

Vince's love of life will make you smile, his heartache will make you cry, and his determination to enjoy life in the face of adversity will inspire you to find the wonder in little things every day.

Vince Copley AM, a proud Ngadjuri man, was born on an Aboriginal mission in South Australia. As a young boy he attended the now famous St Francis House in Adelaide, a home for First Nations boys that produced many future leaders, including civil rights activist Charles Perkins. A star footballer and cricketer, Vince later devoted his life to advancing the rights and improving the lives of First Nations people. He worked closely with Charlie, and with everyone from community leaders to premiers and prime ministers. Along with other Ngadjuri people, he was also active in recovering and protecting Ngadjuri cultural heritage.

Lea McInerney grew up in the Clare Valley on Ngadjuri Country. Her ancestry is Irish-Australian. Lea's writing has been published in Griffith Review and other literary magazines. Lea met Vince in 2016. As well as this book, she worked with Vince on several Ngadjuri projects he led.