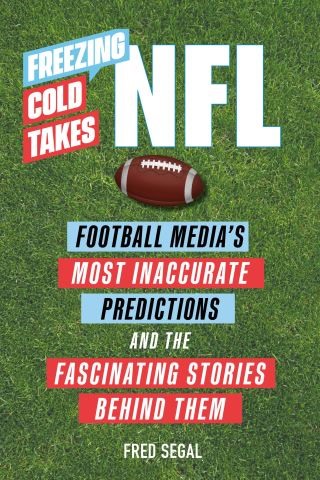 Since 2015, Fred Segal has chronicled “unprophetic” sports predictions on the internet. His Freezing Cold Takes social media pages feature quotes and predictions from members of the sports world that have aged poorly or were, in hindsight, flat-out wrong. The pages have become a guilty pleasure for hundreds of thousands of sports fans who love to see (okay, and mock in good humor) sports media’s infamous “hot takes” that went cold.

With this book, Segal focuses on the NFL, and provides a vast collection of poorly aged predictions and analysis from NFL media members and personalities about some of the most famous teams and players in the league’s history.  He also explores ill-fated commentary related to draft picks, hiring decisions, and some of the NFL’s most notable games.  But this book is not simply a list of quotes. It delves through content mined from internet archives and original interviews with media, players, and coaches. Segal provides important background surrounding each featured mistake to offer essential context as to why the ill-fated prediction was made as well as why the personality who made the prediction is eating their words.

Together, the fourteen chapters—each spotlighting Freezing Cold Takes about a specific team or topic within a certain defined period—create a wholly unique and endlessly entertaining lens through which to explore NFL history.

Fred Segal: Fred Segal is an attorney who practiced law full-time for more than eight years before retiring to pursue other opportunities. He currently operates the popular social media brand Freezing Cold Takes. He has appeared on numerous national radio and TV shows, podcasts, and local shows across the country to discuss his feeds. Major publications such as The Athletic, Sports Illustrated, and USA TODAY have profiled Fred and Freezing Cold Takes. Segal grew up in Miami and has lived in Florida almost his entire life.