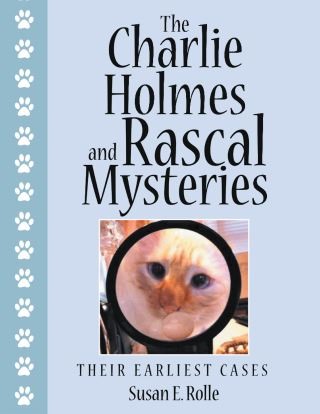 The Charlie Holmes and Rascal Mysteries

Charlie and Rascal Holmes are anything but normal cats. As the beloved fur companions of Master Sherlock and Mistress Charlotte Holmes, the little pals have become quite aware of what is occurring in the lives of the people they love. Charlie and Rascal want nothing more than to become detectives themselves, and spend their days imagining what they would do if their dreams actually came true.
One day when Mistress Holmes discovers her favorite ring is missing and suspects it has been stolen, she admits other jewelry has mysteriously disappeared in the past few weeks. When Sherlock offers to investigate, he has no idea that Charlie and Rascal also want to join the search. As soon as their Master and Mistress leave for a party, the curious kitties set out on a quest for answers. When they’re successful, they decide being detectives is their natural calling in life.
Thus begins the career of two master detectives. Their earliest cases are some of their most exciting.

Susan E. Rolle was raised in Illinois and Florida. Cats have always held a special place in her heart because of their humorous antics and endless curiosity. This is her second book.