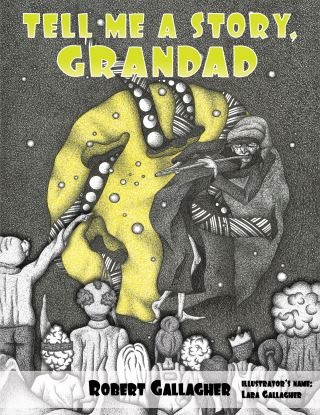 Tell Me A Story, Grandad

I wrote Tell me a Story, Grandad as a result of telling a few stories to my grandchildren. They liked them and I enjoyed telling them, so writing the stories down in book form was a natural development. I also knew a talented artist who was interested in being involved in the project. Tell me a Story, Grandad is a book based in present-day London. There are ten interconnected stories and characters, like ‘Bob’s House in the Clouds’ and ‘My Friend with No Name.’ All invite you to join them in a place somewhere between reality and the world of the imagination. Each story is illustrated by a picture with a specific colour and, like the stories, they are interlinked.            The book is for children aged between four and eight, yet it is also for readers who are much older than this. I hope the book will be read not just by children, but by parents or grandparents as bedtime stories for their children or grandchildren. Hopefully, mums, dads, nans and grandads will add their own imagination and details so that each story becomes theirs as much as mine. I hope you and children everywhere enjoy the stories.

Robert Gallagher: Robert is also the author of Léa and The Moon, Chloé in Love, Zoé under Minoa and Daniella and God, which make a fictional quartet for adults entitled Four Sides of a Circle. Robert is a teacher and author who has lived and worked in the UK, Greece, Kenya and Switzerland. His wife is French and is also a writer. They have three children and grandchildren and have been based in the South of France for many years.