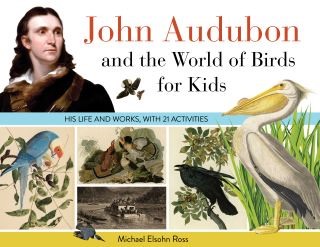 John Audubon and the World of Birds for Kids

His Life and Works, with 21 Activities

John James Audubon's passion for birds inspired a national movement to protect birds and their habitats.

As a child, John would often skip school to roam the countryside. He collected bird nests, unique stones, bits of moss, and other items of interest and developed his talent for creating dramatic bird portraits and skills for observing them in the wild.

Using his abilities as an acute observer, skilled writer, and exceptional artist, Audubon wrote and illustrated a book, Birds of America. Cataloging all these creatures took enormous time and effort—but even more difficult was finding a way to publish it. To make his book a reality he had to persuade wealthy investors to support his dream. The stories of his adventures pursuing the unique birds of the America captured the imagination of audiences.

Audubon became a larger-than-life figure and dubbed himself "the American Woodsman." Years after his death his artwork is still considered a major accomplishment that inspired a greater interest in American birdlife.

John Audubon and the World of Birds for Kids includes 21 hands-on activities and valuable resources for budding ornithologists hiking in his footsteps.

Michael Elsohn Ross:
Michael Elsohn Ross is an award-winning author of over 40 books for children, including Salvador Dali and the Surrealists, She Takes a Stand, Plantology, and A World of Her Own. He lives and works in Yosemite National Park.