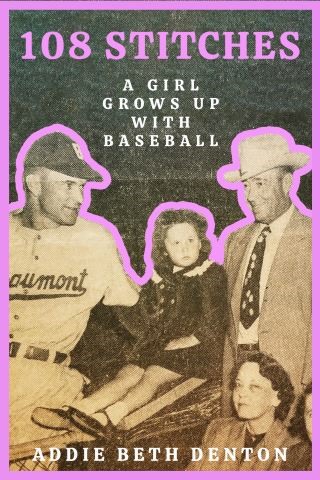 A Girl Grows Up With Baseball

With its sprawl of teams in major, minor, and independent leagues, with its narrative interwoven with our national history, with its catalog of larger-than-life characters, baseball is always a story.

The story of baseball is often told by the players and the managers whose faces we recognize. Those storytellers are always men.

But this baseball story is a girl’s coming-of-age memoir.

Addie Beth Denton’s 108 Stitches reminds us of the women and girls whose lives were shaped by America's national pastime. Denton’s father and uncle were baseball men: her uncle, Harry Craft, was a manager for major league franchises in Kansas City, Chicago, and Houston. As a minor league coach, Harry Craft was Mickey Mantle’s first manager.

108 Stitches captures the sights, smells, and sensations of growing up with baseball from Addie Beth’s unique vantage point. There are home runs, no-hitters, cantankerous old-timers, and ambitious young gunners, but there are also warmhearted family stories, adolescent melodramas, and the multifaceted experiences of girlhood lived within a man’s world.

Written for fans young and old, male and female, Addie Beth Denton’s memoir stitches together her heartfelt memories of a nostalgic period in American and baseball history.

Addie Beth Denton: Addie Beth Denton graduated in a class of twenty-eight in Throckmorton, Texas. She earned a bachelor’s degree at the University of Texas in Austin, master’s degrees at Duke and SMU, and a PhD in clinical psychology at SMU. During her more than forty years in educational psychology and counseling, she has helped students of all ages become successful in school. She is a proud grandmother of five grandsons and lives in Dallas, Texas.