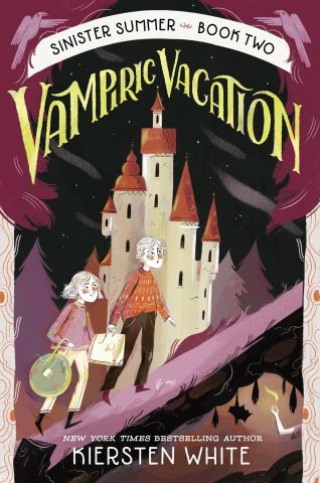 The spooky summer adventures of the Sinister-Winterbottom twins continue in another gothic mystery: can Theo and Alexander solve the secret of the Sanguine Spa in the little Transylvania Mountains? The second book in the new Sinister Summer series by #1 NYT bestselling author Kiersten White, called "perfect for fans of Lemony Snicket, Edward Gorey, and Roald Dahl," by Shelf Awareness.

After leaving Fathoms of Fun, the kids are on their way to the next odd summer destination their aunt has chosen for them. This time, they find themselves dropped off at the Sanguine Spa in the “little Transylvania Mountains.” There they meet the owners: Mina, her mysterious little sister, Lucy (who is extremely pale, can’t go in the sunlight, and has an affinity for hanging upside down from the ceiling), and their intimidating guardian, the Count.

When the Count sends all the children in the spa on a scavenger hunt, the Sinister-Winterbottoms use the excuse to snoop around and discover that this spa may be more than just eerie—it might also hold clues to what happened to their parents. When Wil starts to show vampiric symptoms, the twins resolve to investigate what’s really going on at the Sanguine Spa.

The second book in the Sinister Summer series continues the adventures of the Sinister-Winterbottoms and their aunt who never saw a discount vacation destination she didn’t love.

Kiersten White: Kiersten White has never been a lifeguard, camp counselor, or spa masseuse, but she is the #1 New York Times bestselling author of more than twenty books, including Wretched Waterpark, the first book in the Sinister Summer series, and Beanstalker and Other Hilarious Scarytales. She lives with her family near the beach and keeps all her secrets safely buried in her backyard, where they are guarded by a ferocious tortoise named Kimberly.